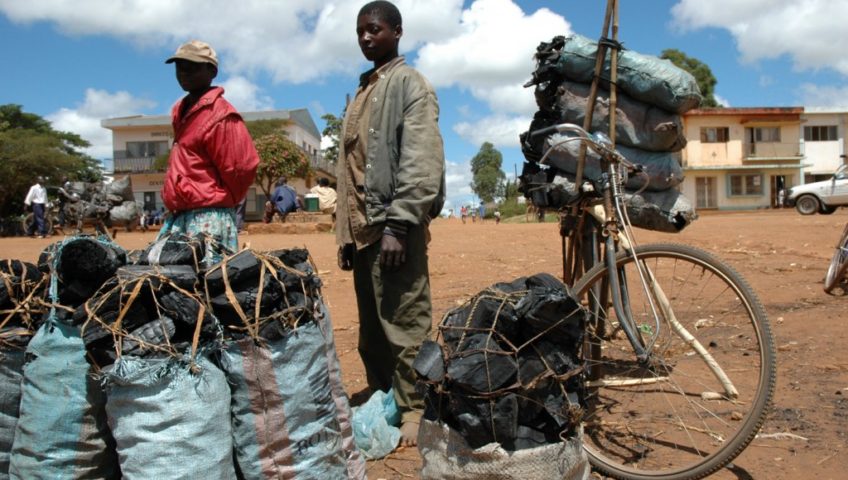 May 25, 2019 No Comments By useradmin1 Rwanda, Stories, Uganda rwanda

Can we grow our way out of the charcoal crisis?

Charcoal production in much of Africa is not only a major source of energy but also often illegal because of its apparent association with deforestation. In this first of our new series of feature articles, we go deeper into the problems and examine the solutions.

In most parts of Africa, a common sight is sacks of charcoal being carried through rural areas towards towns and cities. They are carried on bicycles, motorcycles, cars, pickups and trucks. Sometimes they are moved at night, to avoid being stopped by police, and sometimes during the day they are nodded past by authorities that have already pocketed bribes. Charcoal production is often blamed for massive deforestation. Authorities often try to ban or control the trade, both of which have failed.

There are many half-truths and myths associated with charcoal that are worth dissecting to understand why the trade remains so prevalent and so poorly controlled. It is often believed that charcoal is a fuel used by the poor. This is not true: most charcoal is used for cooking by people in the growing urban areas who generally have more purchasing power than the poor in rural areas. The rural poor generally use firewood. Policy makers hope that the use of charcoal will reduce as countries get richer. This does not happen. There is simply a growth in urban populations and their demand for charcoal. Charcoal is often regarded as a marginal business with little impact on economies. In fact, the charcoal market in Africa has been estimated to be worth between USD 9.2 and 24.5 billion per year (Nelleman et al 2014).

Many development projects have focused on improved cookstoves that reduce the amount of charcoal used. Although better stoves are more efficient, there has been limited success in increasing their use in Africa to an extent that makes much difference to the demand for charcoal. Although some models of cookstove are showing signs of success in some markets, a significant proportion of potential cookstove users in Africa either reject improved stoves even if they are offered free, or express no willingness to pay for even highly subsidized stoves (World Bank 2014).

The most widely held belief concerning charcoal is that it is responsible for widespread deforestation. This is partially true, especially if the definition of ‘deforestation’ is extended to embrace the degradation of woodlands rather than simply their total destruction. There is no doubt that a great deal of wood is cut in Africa to produce charcoal and that large areas are being damaged to supply the cities with their favourite fuel. However, it is seldom possible to demonstrate that charcoal production is responsible for widespread deforestation.

Charcoal production is certainly out of control in some places but whether it could be controlled and made sustainable depends upon a lot of things. Many charcoal makers do not cut whole trees but trim branches, leaving the trees to regenerate; others might use prunings and waste from managed woodlands. Unfortunately, the nature of the charcoal business in most parts of Africa makes it very difficult for the actual production and sale of the commodity to be carried out efficiently and fairly.The fact that charcoal is always available in abundance in all markets in Africa casts doubt upon popular assumptions that charcoal production is denuding landscapes. The World Bank (2011) reports, based on several studies, that ‘scarcity of wood- based biomass occurred in very few and specific locales, and that its extraction rarely resulted in forest loss’. True deforestation is the result of clearance of land for agriculture.

Because of its perceived evils, the trade throughout Africa is completely or partly illegal. Prohibition, however, has mostly failed because of the political economy of the charcoal sector: the informal sector dominates; institutions are weak; illegality attracts criminals; and corruption is rife.

Charcoal is mostly produced by burners who are either given access to trees by landholders who wish to get some much-needed, extra income or the burners simply enter communally-owned or poorly-regulated land and take the wood for free. They use the simplest of technologies: piling earth on the burning wood to carbonize it; they seldom employ improved kilns because of the expense and the difficulty of moving them to the next location.

The burner sells the charcoal through complex but often very efficient pathways to urban markets, usually first to intermediaries and then to larger-scale traders who transport it to final markets. The illegality skews the movement of the commodity: it’s common for consignments to be stopped until a bribe is paid; vehicles — even bicycles — might be impounded (Smith et al 2015); often, trucks move at night to avoid roadblocks.

However, the demand from urban centres is so great that in most cases a fairly efficient informal trade continues, but with added cost at every stage as palms are greased to allow the commodity through. When serious efforts are made to stop the trade, retributions can be rapid.

‘On the 16th of January 2018, the Governor of Kitui County in Kenya announced a ban on commercial production and transportation of charcoal within the county. Following the ban, several trucks carrying charcoal through the county were impounded and violence broke out,’ explained Brian Chiputwa, a Livelihoods Expert with World Agroforestry. ‘Angry residents who regard the illegal charcoal business as a major source of environmental degradation in the area offloaded charcoal from some of the trucks and set alight one of the trucks. The unrest spread to a distant charcoal distribution centre where riots erupted on the Kitui–Garissa highway, blocking it for several hours with immobilized vehicles.’

In retaliation, transporters in Kiambu also protested against the ban by blocking the Nairobi–Nakuru highway with logs and lighting bonfires.

Most African countries have tried some sort of regulation of the charcoal trade but where the trade depends upon routine, informal payments, legislation has proved ineffective.

Yet it is technically possible to make charcoal sustainable. Uganda has put into operation a system under which farmers are allowed to grow trees on degraded areas of forest, either for timber or fuelwood including the production of charcoal. The Government recently called for the private sector to invest in biomass energy. The Energy ministry plans to establish tree nurseries in collaboration with youth to grow seedlings for fuelwood. The hope is that the legally-grown charcoal will compete with the informal charcoal trade. The effort deserves support and could form the basis for a sustainable charcoal industry. However, a number of issues will have to be taken into consideration.

First of all, there is anecdotal evidence that already farmers are expressing a preference to grow timber rather than fuelwood because charcoal in the informal market is cheap at source: landholders and charcoal burners earn very little and most of the profit accrues to intermediaries, dealers, markets and the shadowy figures who facilitate crossing legal lines. Fortunately, waste and prunings from timber production can still produce valuable charcoal. Concurrent with this development, the forest concessions system would need to be managed in a flexible manner to encourage both timber and fuelwood production. It will be challenging for the Government to supervise land allocations for biomass energy to ensure that it is actually used for that purpose; and that appropriate species for high-quality charcoal yield are also included in the species’ list. The choice of trees is important because much of Uganda’s charcoal is from the north, where it is made primarily from acacias with high wood density. The species produces a very popular, heavy charcoal that creates a great deal of heat for its weight. But trees grown in forest concessions are likely to be fast-growing, less-dense species that will produce a less desirable charcoal. Finally, getting charcoal from these new sources into the market might prove difficult.

‘The informal charcoal markets in Uganda are well integrated vertically and very efficient,’ explained Ross Hughes of the World Bank. ‘It will be challenging for new formal sources of charcoal to compete in the current informal market.’

There are lessons to be learned from Rwanda. Given that the majority of forests in Rwanda are protected, charcoal production relies on privately-owned forests and woodlots. Around 72% of Rwanda’s firewood and charcoal comes from eucalyptus woodlots (MINIRENA 2013). Up to 80% of all charcoal is produced in the Southwest on sloping and least-productive land. Woodlots and crop production are the main components of the agricultural landscape, with farm households increasingly managing woodlots of different sizes (Ndayambaje et al 2013). Eucalypts are a major source of income for many households through charcoal production. However, individual charcoal producers often have poor negotiation power with traders owing to their weak organization. Further, the production and commercialization of charcoal are subject to taxes and regulations that restrict the harvesting of immature trees. Woodlot owners do not like these multiple layers of control and advocate a single tax for tree harvesting and charcoal making, and a single tax for the transportation of wood products.

The Government of Uganda will need to be serious about regulating to stimulate the legal charcoal industry rather than restrain it. Fortunately, Government policy recognises the value of biomass energy, including charcoal. The Constitution requires the Government to ‘promote and implement energy policies that will ensure that people’s basic needs and those of environmental preservation are met’.

There are efforts to decentralize the operations of the energy sector but in liaison with other stakeholders in order to effectively deliver energy services efficiently.  This is leading to a welcome focus on making charcoal sustainable. The United Nations Development Programme, for instance, is engaged in efficient charcoal production under the Green Charcoal Project in collaboration with Ministry of Energy and local governments in Uganda. However, local and even national efforts may not be enough. It must be recognized that charcoal is heavily traded across national borders, usually illegally. Ugandan charcoal moves into Kenya, Kenyan charcoal moves into Somalia and Somalia has for decades traded charcoal from the Horn of Africa into the Gulf States.

World Agroforestry is leading a project called Harnessing the potential of trees-on-farms for meeting national and global biodiversity targets. Part of the project sets out to understand the incentives for farmers to plant trees, which kinds of trees, and for what uses. In Uganda, the project will seek to understand how tree planting for woodfuel can be made profitable and desirable for farmers. Sharing this knowledge with policy makers throughout the region is designed to lead to improvements in the lot of poor farmers, both economically and environmentally, with particular emphasis on addressing the many complex issues facing the charcoal trade.  The debate on sustainable charcoal comes at an important time. Concerns have been voiced about a looming woodfuel crisis since the oil crisis of the 1970s. Up to now, wood has not disappeared. However, areas are being degraded at least partly through charcoal exploitation, and charcoal is increasingly being sourced from areas more distant from urban centres. It will be important to address these trends, and a fresh and healthy debate on the policy challenges of replacing the current charcoal business model with a sustainable model is very much needed