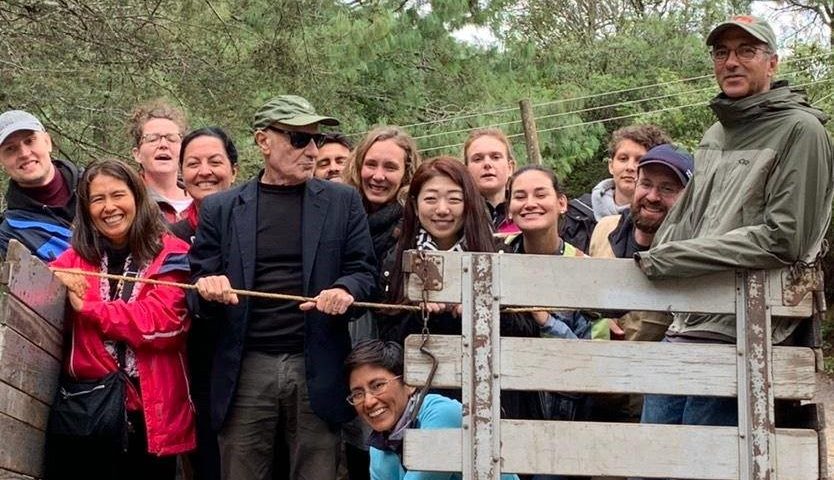 The National Autonomous University of Mexico hosted the 2019 Earth System Governance (ESG) Conference, 6–8 November 2019. Having analysed some first results from the “Trees on Farms for biodiversity” project, I was invited to give three presentations on policy integration, governance networks and biodiversity planning processes. I was also curious to learn about the different governance approaches presented in the research streams from “architecture and agency” to “adaptiveness and reflexivity”. Knowing about the dependence of farmers’ decisions on a variety of legal, economic and social factors, tree governance always includes a number of very different components. But will insights presented in fancy, postcolonial libraries somewhere in Mexico really be relevant for out farmers in Uganda and Honduras? 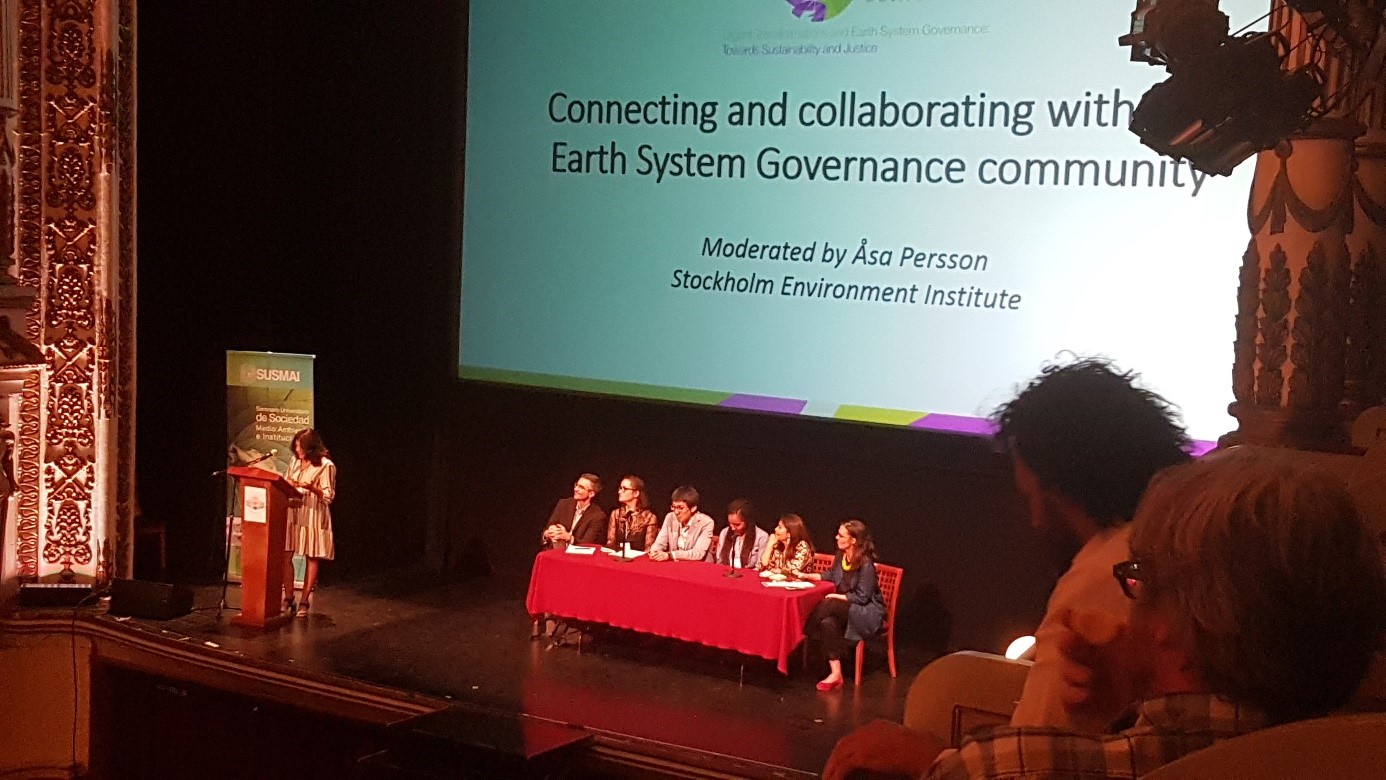 I was surprised by the beauty of the historical center with its colourful alleys organised in squares and the contrast of the forested mountains towering over the dry, semi-urban valleys. After landing. we spent a couple of days in the mountain village Capulalpam at about 2500 Meters above sea level for an intense pre-conference workshop reflecting our research with the new ESG research agenda. Whenever the rain would stop, we went to learn about the community managing 6000 ha of community forest certified by the Forest Stewardship Council (FSC). In Mexico, deforestation is threatened by agroindustry. Water intensive avocado production for instance has a strong impact. With one of the most permissive mining regulations in the world, it is however particularly mining that leads to resource conflicts. In the Capulalpam region, the community is fighting a long legal process with a mining company.

The chair of the conference, Professor Leticia Merino, created a motivating that spilled over to the participants. In her approach to earth system governance, she linked international relations and value chains with local community forestry, noting among the participants both international governance academics and representatives of local communities. When the actual conference started a couple of days later, the keynote speaker Peter Dauvergne (Vancouver University) spoke of the potential of business initiatives to contribute to sustainability. He noted that new initiatives in corporate social responsibility are going far beyond ‘greenwashing’, nevertheless, experience with sustainable business models have shown that, if successful, they lead to further expansion and hence undermine sustainability. Kathryne Hochstetler (Professor of Political Science at the University of Waterloo, Canada) highlighted that despite 200 years of independence from colonising countries, Latin American countries have only had about 40 years of democratic systems with environmental ministries established only relatively recently.

Brazil is a major environmental player based on its power to manage or destroy large expanses of environmental resources. Hochstetler saw it being a biodiversity leader due to its large expanses of Amazon forest, but without many countries willing to follow its lead. Matias Franchini (member of the International System in the Anthropocene and Climate Change Research Program) observed that biodiversity was still not relevant to large parts of the Brazilian population, which is reflected in its soft environmental legislation. Her colleague, Eduardo Viola, presented the dynamics of increasing and decreasing deforestation rates after the ’90s, arguing that it was an increasingly effective rule of law and sustainable economic growth that managed to reduce tropical deforestation.

Ana Flávia Barros Platiau, director of the Brasilia Institute for International Relations, pointed to the inability of South American collaborative arrangements to have any environmental impact. Instead, it was international trade restrictions, such as a fishing ban on Ecuador and Brazil or restrictions on Brazilian soy beans, that had an impact. In one of the conference lunches in a nice little restaurant, Ana Flávia and Robert Dauvergne made me even more aware how important international agreements and legal arrangements are for the management of trees in developing countries. 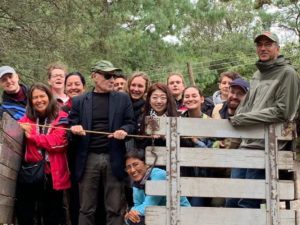 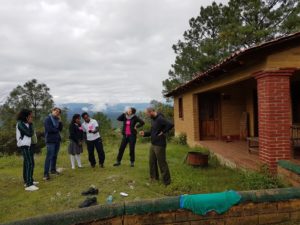 As I knew about the many initiatives on value chains in our partner countries, I was curious to see whether presenters would share this view on the importance of regulation in the contrast to voluntary market schemes. Hamish van der Ven (assistant professor in the School of Environment and the Department of Political Science at McGill University) gave an overview of his book, Beyond greenwash, saying that private initiatives always compete with regulation and ambition and one tends to incentivise stronger adjustments in the other. Yixian Sun (School of Forestry and Environmental Studies Yale University), however, found that deforestation in certification areas had increased, concluding that certification is not an appropriate instrument for reducing deforestation and other secondary effects of expanded production. Instead, complementary governance approaches are needed. Janina Grabs (ETH Zurich’s Environmental Policy Lab) supported this hypothesis by pointing to the dilemma that credible ecological certification of coffee leads to an expansion of production.  The findings in Honduras, Costa Rica and Colombia let Grabs conclude that there was a need to rethink the concept of certification being more strongly focused on food and personal health instead of on ecosystem health. She showed examples of how to connect certification to commitments to comply with legal approaches, such as the Brazilian forestry code. Despite consumers being confronted with an overwhelming complexity of labels, van der Ven noted that decisions about labelling standards were mostly taken by companies, not by consumers.

All those experiences convinced me to believe that private initiatives always need to be complemented by governmental regulation to deliver on sustainability.

Presenting a draft of a bookchapter I had been writing with my colleagues Fiona Kinniburgh (Bavarian School of Public Policy, Technical University of München), Marjanneke Virje (Wageningen University) and Hens Runhaar (Utrecht University), we find that literature indicates that the overall inclusion of biodiversity objectives in agricultural policies and practices was generally low. Biodiversity instruments and policies were predominantly ‘add on’ and did not directly address the dominant productivist paradigms. In general, a stronger transformation of agriculture integrating biodiversity objectives will be necessary to achieve both global biodiversity goals and the Sustainable Development Goals.

As one of the other speakers of my panel, Karina Barquet (Stockholm Environment Institute) used the example of ‘peace parks’ (connected protected areas at borders of Central American countries) to show how the identity of local populations and the perception of protected areas were deeply connected. Michelle Lim (Adelaide Law School) presented the concept of Nature’s contributions to people as a key element of recent publications from the Intergovernmental Science-Policy Platform on Biodiversity and Ecosystem Services and explained how this can contribute to orchestrate international law for integrated biodiversity governance, for example, by specifying Aichi Targets or strengthening national biodiversity strategic action plans. Katarzyna Negacz (University of Amsterdam) presented an analysis of transnational initiatives supporting biodiversity projects and showed that a major share is directed to agriculture projects. When asked about the importance of political will, I pointed to the vested interests in political decision making and the importance of public attention. My hypothesis is that only strong narratives, such as insect loss or tropical deforestation will create “windows of opportunities” for political decision makers to induce political change.

Presentation 2: From deforestation to trees on farms: identifying incentives and coalitions for sustainable land use in the Peruvian Amazon

Based on a social network analysis I conducted without project partners in Peru we analysed the constellations and interactions of governance actors on different political levels. Key results were that the regulating agencies in agriculture and forestry play a key role in land titling; formal registration of trees is a major obstacle to the commercialisation of timber; capacity-building and extension services provide a strong but yet disregarded potential for transforming dominant land-use practices whereas agencies from the environmental sector were hardly visible. While producing both quantitative and qualitative information, our results highlight the potential of Net-Map to connect different actor groups in structured learning processes.

Matthew Jurjonas (Autonomous University of Mexico) presented a study of rural communities in Oaxaca, arguing that taking forest areas out of production leads to outmigration of young people who will eventually produce more carbon emissions in their urban lifestyles. Instead, sustainable development strategies including jobs and income generation through resource use have been shown to produce both environmental impacts and economic perspectives. Laura Quiroz-Rosas and Rafael Calderón-Contreras (both Uam Cuajimalpa) compared ecological and economic developments of two cases of ‘pueblos mágicos’ as places with special touristic and cultural potential. The expansion of eco-tourism was shown to lead to vertical urban growth into natural landscapes as well as gentrification and social conversion to more resource-intensive lifestyles.

The discussants agreed that understanding social dynamics and looking at conservation measures in an integrated way is key to produce lasting conservation outcomes. I was asked if national governments actually matter for conservation. I replied that they are central: governments had initiated deforestation by directing development into the Amazon and incentivising agricultural expansion. As a very important step, they will need to reverse those perverse incentives; and there is large potential for supporting trees on farms.

In Peru, I found that the national biodiversity strategic action plan is dominated by capitalist and protectionist narratives, focussing on the economic value of biodiversity and protected areas. The plan misses links to many important sector policies, such as those regulating fish extraction, forestry and agriculture. There is a strong participation of non-environmental sectors in biodiversity planning, which creates a strong, but as yet unused, potential for mainstreaming. Identifying shortcomings in policy planning is a necessary prerequisite to stimulate institutional learning.

With a backpack of new ideas and inspiring contacts, I left Mexico motivated to further explore possible solutions for the support of agroforestry systems.

For some impressions on the Oaxaca conference, please watch this clip: