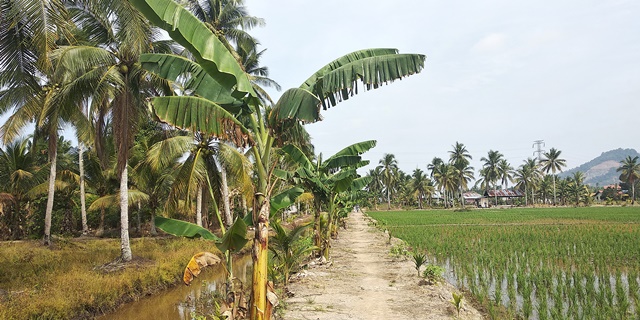 Options for trees on farms in Kalimantan, Indonesia

Researchers are exploring existing systems that mix trees with rice, oil palm and other species on both mineral and peat soils so as to understand how farmers can increase biodiversity

Growing more trees on agricultural land can increase carbon storage and biological diversity, both of which are critical for the survival of life as we know it. Trees already contribute more than 75% of carbon sequestration on agricultural land, sequestering approximately 0.73 gigatonnes of carbon dioxide per year over the past decade. Vitally, trees’ support for biodiversity includes habitat for insects that provide food for birds, for pollination and biological pest control, and a greatly increased diversity of soil organisms.

A new project starting in five countries is examining ways to make it easier for farmers to grow more trees on their farms with an overarching goal of helping countries meet the United Nations’ Convention on Biodiversity’s ‘Aichi Target 7’: By 2020, areas under agriculture, aquaculture and forestry are managed sustainably, ensuring conservation of biodiversity. Harnessing the Potential of Trees on Farms for Meeting National and Global Biodiversity Targets (aka ‘Trees on Farms’) is funded by the International Climate Initiative of the German Federal Ministry for the Environment, Nature Conservation and Nuclear Safety. The project is being implemented in Honduras, Indonesia, Peru, Rwanda and Uganda, some of the most biodiverse nations on Earth that are also experiencing deforestation.

In Indonesia, the project team is led by the Center for International Forestry Research, focusing on the province of West Kalimantan on the island of Borneo, extending 147,307 km² with a population of over 4.4 million. The state forest land of 8,355,597.37 hectares represents about 60% of the total land area of the province. Government records show that about half of the forest estate area is controlled by large-scale concessions, such as logging and industrial timber plantations. In recent years, there has been a significant increase in mining activities and oil-palm plantations. Many of the concessions are operating in areas inhabited by customary communities who have been using the land and forest resources for generations, creating considerable conflict. Most of the land is low-lying, swampy, peat and mineral soils, with some low hills extending east to west, mountain ranges in the north and south and hundreds of rivers.

The project team, made up of scientists and support staff from CIFOR, the World Agroforestry Centre (ICRAF), Georg August Universität, Gottingen, Tanjungpura University, Pontianak and the International Union for Conservation of Nature (IUCN), have already examined three farming systems that could be improved through policy changes, technical support and capacity building to encourage wider adoption by farmers. In practice, what this might mean could be recommending to the government changes to policies about the cultivation of trees on private land or ways of improving the value chains in which farmers move their products from farm to market; encouraging agricultural and forestry advisors to be taught the best methods for training farmers in how to optimally manage trees, including establishing tree nurseries that would provide higher quality seeds and seedlings that would have greater yields; and increasing the knowledge of all people — government, farmers, NGOs, the larger-scale private sector — in the benefits of increasing the number and diversity of trees on farms.

The first was an agroforestry and rice system in two different configurations: trees in the rice field; and trees around the edges, on the ‘bunds’. The former was an older, well-established system created during the Dutch colonial era; the latter was an experiment by farmer Setia Budhi, who planted coconut, ‘jengkol’ (Archidendron pauciflorum), mango and other tree species on the bunds to increase his income and spread risk. The researchers, in discussion with Budhi, discovered that rice was the staple for his family and the main source of income whereas his planting of trees was an attempt to maximize the use of the land to increase his income and act as insurance against the increasing salination, which, if continued unabated, would render the land unsuitable for rice. Trees, particularly those species tolerant of salinity, could stave off the rising salination or even become the bulwark against increased poverty if the salinity could not be halted.

The second system featured jengkol, ‘petai’ (Parkia speciosa) and durian (Durio spp) intercropped with oil palm. Uti (many Indonesians have only one name) planted the trees as an experiment at the same time as he planted the palm, about five years ago. He continues to plant, particularly durian trees, to diversify his income and lower his risk in the event of price decreases for palm oil. (See lead photo)

The third, hosted by Siyanto, head of a nearby village, was a traditional agroforestry system known as ‘tembawang’, which is land usually owned by a clan and used by its members. The tembawang featured remnant forest with planted durian, rambutan, cocoa, coffee and numerous other fruit and nut species. In appearance like a jungle or secondary forest, the system featured a clear and flowing stream from a spring. Grown on community-managed land, residents had rights to harvest the products of specific trees but could not cut them down.

The next step for the team will be to identify the best systems for different types of land and socioeconomic conditions of farmers that could be expanded to other areas. Additionally, advice will be provided to the provincial and district governments for their planning on how to include more trees on farms to encourage biodiversity and other benefits.