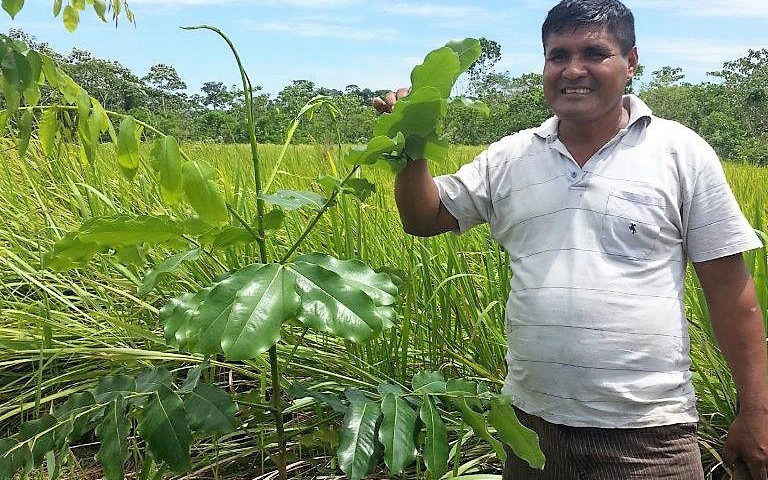 The forest is an ally not an enemy: can Peruvian farms support biodiversity? 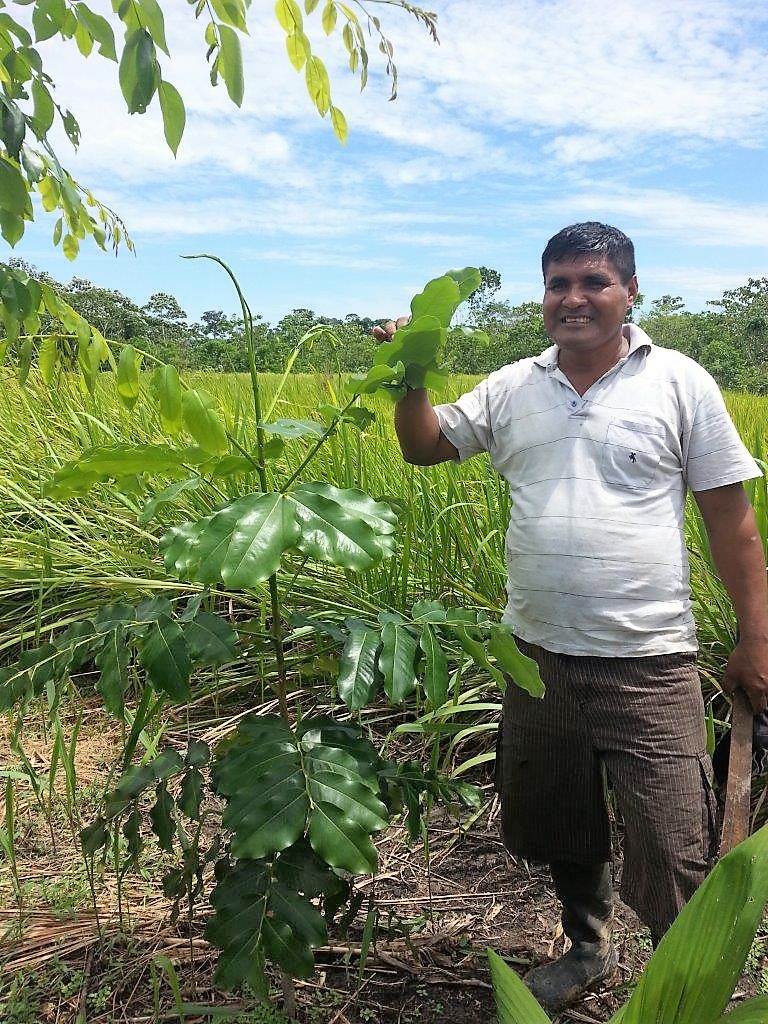 A new project in Peru is setting out to overcome barriers to growing more trees on farms, to protect biodiversity and help the country meet its nationally determined contributions to reducing greenhouse gas emissions

Peru has more than 70 million hectares of tropical forests. However, between 2001 and 2016 the country lost more than 1.9 million hectares largely owing to expansion of agriculture, and the trend continues. Deforestation is responsible for 51% of Peru’s emissions of greenhouse gases.

“Agriculture is the main driver of deforestation in Peru,” confirmed José Álvarez, director-general of the General Directorate of Biological Diversity, Ministry of Environment. “The strategy that is usually considered when framing the ideal relationship between agriculture and forests is one in which agriculture is intensified. By increasing productivity and, therefore, the income generated from the cultivated area, farmers will not need to further expand their farms into forests.”

“But that does not hold in migration pioneer frontiers where governance and law enforcement are weak. If it works, more people might be attracted to settle and expand their agricultural activity.”

Álvarez was speaking at the opening workshop of a new project, Harnessing the Potential of Trees on Farms for Meeting National and Global Biodiversity Targets (Trees on Farms/‘Arboles en las Chacras’), funded by the Federal Government of Germany’s International Climate Initiative, held on 3 July 2018 in Lima, Peru.

He explained that over the last few years it had become clear that protected areas were the fundamental tool for conservation. However, these alone were not enough to guarantee success. Interventions outside protected areas were required. Agriculture, taken as a whole, was particularly important for conservation of biodiversity. The high biodiversity level of a remote farm might not count as part of conservation if it was considered in isolation and not as part of a wider, interconnected landscape. 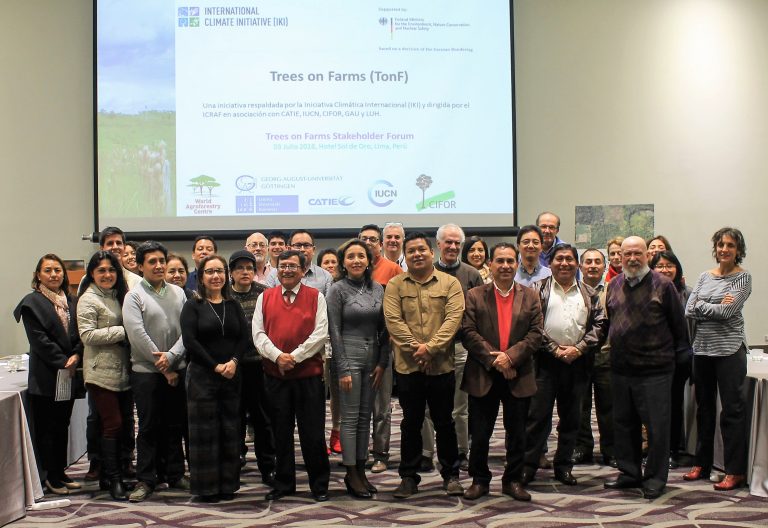 Participants at the opening workshop of the project titled Harnessing the Potential of Trees on Farms for Meeting National and Global Biodiversity Targets. Photo: World Agroforerestry Centre

“’Conservation agreements’ might be a good way to work with farmers,” he continued. “But the challenge is to convince farmers that keeping forests is important, because in them there is the solution to many of the problems related to land degradation that they face in agricultural production. The forest is an ally and not an enemy, so maintaining key forest functions across landscapes in the long term will benefit farmers.”

“The key issue is, indeed, not about forests or agriculture as alternatives,” confirmed Valentina Robiglio of the World Agroforestry Centre (ICRAF) Latin America. “In the Peruvian Amazon, more than half of the 7.5 million hectares of former forest land now under agriculture is managed by family farmers. The key is multifunctionality: how these smallholder landscapes can provide the functions formerly performed by forest ecosystems, which are beneficial for farmers as well as for the conservation of forests and of biodiversity. We have to highlight the interconnectedness of the two sides: the agricultural matrix can support forest conservation and in turn conservation of the forest can support key functions for agriculture to be productive and resilient.”

Valentina Robligio (left) and José Alvarez at the opening workshop of the project titled Harnessing the Potential of Trees on Farms for Meeting National and Global Biodiversity Targets. Photo: World Agroforerestry Centre

The Trees on Farms project aims to expand biodiversity by increasing the number and variety of trees in agricultural landscapes, thus helping to meet Aichi Target 7 of the United Nations Convention on Biodiversity. ICRAF supports the project in five countries and directly implements it in Uganda, Rwanda and Peru. The Centre for International Forestry Research is taking the lead in Indonesia, while the Centro Agronómico Tropical de Investigación y Enseñanza (CATIE/Centre for Higher Education and Research in Tropical Agronomy) coordinates activities in Honduras. The International Union for the Conservation of Nature provides knowledge management and outreach expertise and Gorge-August-Universität Göttingen provides specific scientific support.

“In the national debate about forests,” added Robiglio, “biodiversity has been less prominent than climate change and REDD+ and, more recently, restoration. Forest loss is measured in terms of hectares and amount of CO2 emitted, and restoration in the reconstitution of hectares of forest cover, including plantations. However, we rarely hear consideration of the spatial configuration of this loss and its implications in terms of the loss or recovery of desired ecological functions based on species. When we discuss forest loss, location matters. What also matters is which forest functions have to be restored. With this project, we hope to bring back the focus on biological diversity conservation through a landscape approach.” 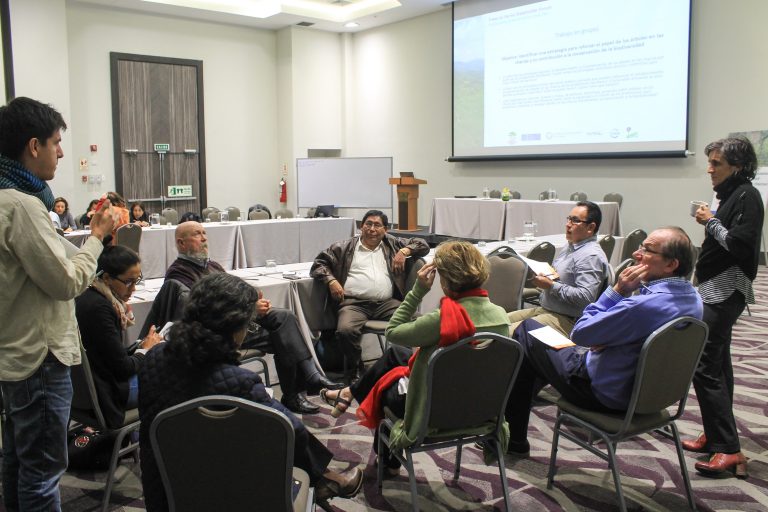 Belvi Cáceres of the National Forest and Wildlife Service (Servicio Nacional Forestal y de Fauna Silvestre) explained the regulations governing plantations and agroforestry systems established on private and state land. In the latter, ‘Special Treatment Zones’ allow agroforestry concessions (Cesiones en Uso por Sistemas Agroforestales) to be established that recognize the de facto occupation and establish a mechanism that brings it within the law. The mechanism includes incentives for the use of native and threatened species in line with Aichi Target 7. However, none have been implemented because of the complicated design of the mechanism.

“Ucayali is making a huge effort to integrate and align policies that relate to forests and their resources, including biodiversity,” said Jack Flores of the General Directorate of Biological Diversity, Regional Government of Ucayali (Gobierno Regional de Ucayali). “The Regional Biodiversity Strategy of Ucayali has been integrated into regional planning documents, such as the low carbon development strategy, which is the most recent strategic document the environmental regional authority has elaborated, with the objective of developing a unified vision about sustainable development and integrated land-use planning. It is important that institutions progress in synergy as part of a strategy. With international cooperation, in particular with Norway, Ucayali has engaged in several deforestation reduction processes, signing a number of international commitments to reduce deforestation.”

It is important to note that the Regional Government is working together with the National Forest and Wildlife Service in the design of priority ecosystems for biodiversity conservation in Ucayali region. In the same process, they are elaborating new land management tools, such as a map of anthropic pressure, which reveals areas where most of the threats to biodiversity conservation are concentrated. The Trees on Farms project will focus on these areas.